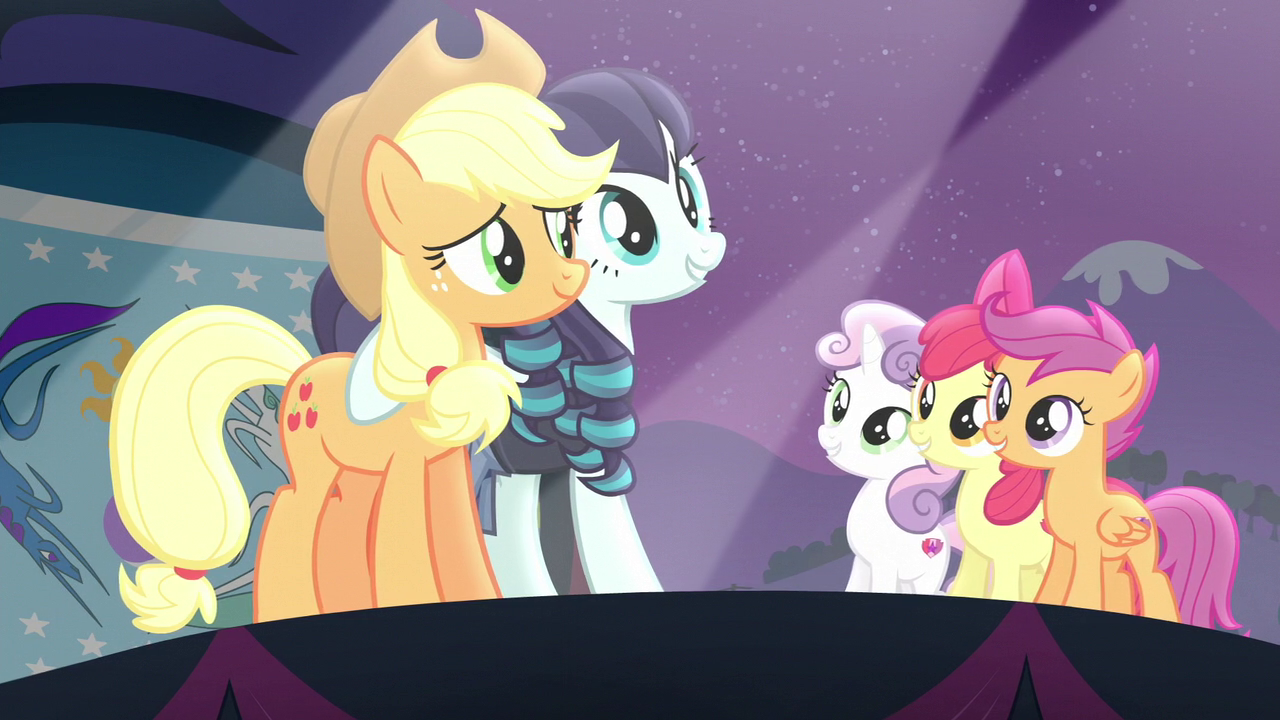 Just finished watching this week's new episode "The Mane Attraction" and...as Amy Keating Rogers' final episode of the series that had received so much hype from Twitter posts and the San Diego Comic Con animatic, did she manage to go out with a bang? Well, I can safely say this...MOVE OVER, "CRUSADERS OF THE LOST MARK"-I JUST FOUND MY NEW FAVORITE EPISODE!!!


When it came to the story, it is so fitting for Amy's final episode to star Applejack since her first solo episode was an Applejack episode (Season 1's "Applebuck Season") and it has such a heartwarming moral of how having such an enormous amount of talent-even at a young age-often isn't enough to get you into the spotlight since you really need to create a lasting image that will stay in the public's mind far more than just putting on an entertaining performance.


The music and songs? What can I say, it's Daniel Ingram and he did a spectacular job as always. Not only that, but...sweet Celestia, does Tony Award winner Lena Hall (who voiced Countess Coloratura/Rara) have some serious singing chops-especially with the songs "Equestria, The Land I Love" and "The Magic Inside" that had me in tears since it feels like Amy's farewell swan songs to the Bronies and Pegasisters of the community for supporting her five years of writing for the series.


The animation? Man, did the team at DHX Media go all out for this episode as they are always trying to get better and better with every episode and the animation here is no exception. From the fluid movements to the lighting and especially with the sequences for the songs "The Spectacle" and "The Magic Inside", the animation in this episode was a gem to behold!


And when it comes to the characters, it was so strong in the feels when it came to dealing with the relationship between Applejack and Rara and the two play off of each other brilliantly-not to mention that I loved Rara's design both as the Equestrian version of Lady Gaga and when she reveals her true self at the end and...I really hope that we get to see Rara again in future seasons. As for Rara's manager Svengallop, he's one of those characters that you love to hate as I wanted to knock him out every time he thought of himself and not what Rara wanted to do with her career.


Overall, "The Mane Attraction" was a spectacular way for Amy Keating Rogers to end her work with "My Little Pony" on the highest note possible and I'm so proud to give this episode a rating of a 10 out of 10.


And before I close out...Amy, if you're reading this, I think I speak for all of us Bronies when I say that we thank you so much for your five year contribution to "My Little Pony: Friendship Is Magic". You've made us laugh, you've made us cry, and most of all...you've shown us all what it really means to be a true true friend. It was such an honor to meet and interact with you at this year's BronyCon and I can safely say that you're not only one of the most generous and sweetest people I have ever met, but one of the best writers the series ever had in my opinion because...even when there were obstacles in your way to bring you down, you always managed to pull through in the end and deliver a truly heartfelt episode and the lessons in those episodes have really helped to better myself as a person. I wish you the best of luck at Disney with the series "Star Darlings" and I want to let you know that I will always be there to support your work as a fan and a friend and...I can safely say that you will be greatly missed by the Brony community.


With that said, I will see you all next week for the two-part Season 5 finale. Until then, stay awesome and...fare thee well, Amy.