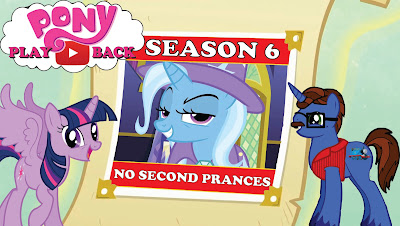 Starlight Glimmer and Trixie, two formerly villainous unicorns who actually have a lot in common when you think about it…but what would happen if these two met each other and became friends? Let’s find out with “No Second Prances”!
When Starlight Glimmer starts becoming friends with a fellow formerly-bad pony, Twilight tries to stop her. When I first heard about this episode and saw the synopsis, I was extremely excited to see Trixie returning after she disappeared for three seasons without a word and sure enough...my excitement paid off in the best possible way.
The story was an interesting dive into the psyches of both Starlight Glimmer and Trixie seeing as they're both characters who share a common rocky past and were able to find a common bond between them to become friends...even to the point where Trixie would attempt suicide to herself after getting so depressed over losing the only friend she's had in years-yeah folks, they went there!  On top of that, this episode's just straight-up funny and there were many humorous stand-out moments from Big Macintosh speaking in an articulate voice to Cranky Doodle asking Princess Celestia about her flowing mane.
In terms of animation, the team at DHX have done another outstanding job and their hard work really comes into play during the Hoofdini film strip flashback as well as many of the comedic sequences and expressions where I know that there will be a lot more memes on the way.
And when it comes to the characters, they were all in top form-especially Starlight Glimmer and Trixie, seeing as the two of them had a very strong dynamic with Starlight striving to do her best with what she had in terms of making friends and Trixie trying to make a genuine effort to redeem herself in the eyes of Ponyville after the events of "Boast Busters" and "Magic Duel"-seriously, this is the best portrayal of Trixie in the entire series and I can relate to her on a personal level seeing as...despite my best efforts, I didn't have any friends at all throughout my school years until I started my YouTube channel and got access to some of my best friends in both the Thomas and My Little Pony communities.  On top of that, Twilight Sparkle was awesome as well seeing as she did have Starlight's well-being in mind while also admitting her own mistakes on trying to find a friend for her and not Starlight make her own decisions-bravo to Tara Strong, Kelly Sheridan and Kathleen Barr for delivering an awesome performance for their characters!
Overall, "No Second Prances" has become one of my favorites of Season 6 as well as the entire series and gets a rating of 10 out of 10.  Welcome back, Trixie...welcome back. 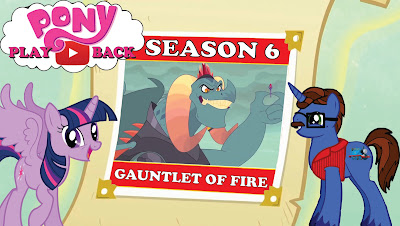 Aw, Spike…why must you always be portrayed as Equestria’s whipping dog? But will this week’s episode be able to change my views on you as a character? Let's find out with “Gauntlet Of Fire”!
In order to save his friends, Spike is forced to compete in a perilous Gauntlet for the title of Dragon Lord. When I first heard about this episode and saw the synopsis, my first reaction was “Really…WE’RE SERIOUSLY DOING 'DRAGON QUEST' AGAIN?!?!?” because...if you know me well, "Dragon Quest" is one of my least favorite episodes of Season 2 as well as the entire series.  But much like "The Crystalling", I did my best to go into this episode with an open mind and to my surprise...sweet Celestia, this episode was awesome!
The story can easily be described as Season 2's "Dragon Quest" done right as it was much more action-packed and intense than that episode and there was a good dose of humor to keep the episode entertaining-in fact, I dare say that this episode handled the mean-spirited side of humor better than in "Dragon Quest" especially when it came to Garble (who I'll get to in a second) constantly getting smashed around during the gauntlet...and before you say anything, yes I did smirk every time.
In terms of animation, the team at DHX really amped up their game with what they're capable of doing with Flash as they gave us a huge dosage of world-building in this episode and it especially comes into play during things like...the scenes in the Dragon Lands (which seriously sounds like something out of the series "Dragon Tales"), the sequence of the dragons competing in the gauntlet and the different designs of dragons where I swear that Dragon Lord Torch looks like a crossover between any of Don Bluth's animated films and the How To Train Your Dragon franchise.
And when it came to the characters, Spike was in top form as this episode showed that he would go to any length to save his friends in Ponyville and even his enemies if he has to-kudos to Cathy Weseluck for giving a heartfelt performance for our favorite dragon!  Speaking of dragons, we FINALLY have a dragon who isn't a complete asshole and who is extremely likeable in the form of Princess Ember and I really hope we see her again...depending on how long MLP goes on.  But speaking of complete assholes, Garble is still the stereotypical bullying asshole that he was back in Season 2 and I really hope that we never see him again after this episode.
Overall...welcome back, Joanna Lewis and Kristine Songco!  "Gauntlet Of Fire" has officially become one of my favorite episodes of Season 6 and gets a rating of a 10 out of 10...and since there isn't a new episode next week, I'll see you all in two weeks for "No Second Prances"!  Until then, stay awesome Bronies!

MLEEP Reviews: On Your Marks 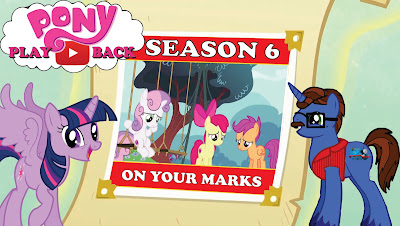 So, as many of us remember back in Season 5, the Cutie Mark Crusaders finally got their cutie marks…but now that they have their marks, what would happen next for them? Let’s find out with “On Your Marks”!

With their cutie marks finally acquired, the Cutie Mark Crusaders struggle with the question of what to do now. Apple Bloom suggests they embrace their destinies, but she and her friends don't exactly agree on how.

Much like last week’s episode, I was really excited to see ...this episode when I first heard about it and saw the synopsis because I was one of the many who adored “Crusaders of the Lost Mark” and...this was a pretty damn good episode. The story is a solid follow-up to "Crusaders Of The Lost Mark" and there was a good moral and humor to go with it...however, the second half of the episode is where things started to get predictable with the introduction of Tender Taps since I knew right away that he was going to end up being the CMC's first cutie mark problem; thus making the second half of the episode feel boring to sit through.


When it came to the animation, the team at DHX always does a great job and it really shows in this episode during the montage sequence of the CMC trying to find ponies with cutie mark problems as well as during our first song of the season "Out On My Own" of which I will say is a great song and it really showcases Michelle Creber's musical talents to their full potential.

And when it comes to the characters, the Cutie Mark Crusaders were in top form as they played off each other brilliantly and I can definitely tell that they've matured since their early beginnings-kudos to Michelle Creber, Claire Corlett and Maddy Peters for giving a truly heartfelt performance with their characters! Not only that, but Tender Taps was a great new addition as well and I can definitely say that I relate with him on a personal level because...while I am excited to hopefully be able to do my panel at this year's BronyCon, I'm pretty nervous as well.

Overall, despite its faults, "On Your Marks" is a decent follow-up to Crusaders Of The Lost Mark and gets a rating of a 9 out of 10

MLEEP Reviews: The Gift Of The Maud Pie 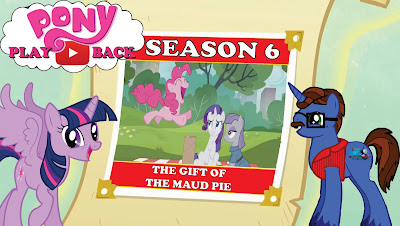 Season 6, Episode 3: The Gift Of The Maud Pie
Written By Mike & Wil Fox

So, after what was easily the weakest season premiere in Friendship Is Magic's history...can two new writers to the show staff deliver an entertaining and heartwarming episode? Let's take a look at "The Gift Of The Maud Pie"!
While in Manehattan looking for the ideal location for her new store, Rarity has to help Pinkie Pie find the perfect gift for her sister, Maud – without Maud finding out. When I first heard about this episode and saw the synopsis, I was really excited to see it because…as the title suggests, this episode is a reference to the 1905 Christmas short story “The Gift Of The Magi” by O. Henry and…as far as adaptations of this classic tale go, is it a good one? Well, even though it's not a Hearthswarming-themed episode like I thought it was originally going to be, it's still pretty damn good.
The story truly did capture the spirit of the classic Christmas tale along with its message of making sacrifices for the ones that we love the most in the world.  Not only that, but it was packed to the brim with humor...well, what do you expect when you have a comedic team-up like the Pie Sisters and Rarity?
When it came to the animation, the team at DHX truly did an outstanding job in expanding upon the world of Manehattan when it came to the scenes where our heroes are seeing the sights and in the comedic moments from Pinkie Pie where I know there will be a lot more memes on the way.
And when it came to the characters, they were all in top form-especially the Pie Sisters and Rarity who not played off each other brilliantly with their styles of comedy, but the love they have for each other is something to see.  Kudos to Andrea Libman, Tabitha St. Germain and Ingrid Nilson for delivering another truly heartfelt performance with their characters!
Overall, "The Gift Of The Maud Pie" has become one of my favorites of Season 6 and gets a rating of a 10 out of 10...and honestly, I can't wait to see what happens next...but until then, "rock" on Bronies!