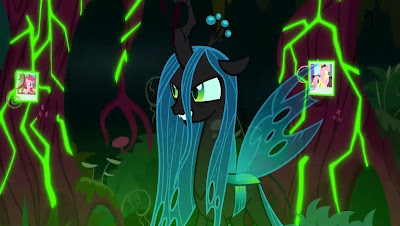 Back in the Season 6 finale, Starlight Glimmer and her team of anti-heroes defeated Queen Chrysalis and her Changeling army resulting in Thorax assuming the throne and the Changelings being a force for good...but that didn't stop Queen Chrysalis from vowing to exact her revenge on Starlight Glimmer one day and that day is today in our next episode for Season 8, let's see what evil scheme that Chrysalis has planned in 'The Mean 6'!

Queen Chrysalis returns, ready to exact her revenge on Starlight Glimmer and the Mane 6!

Out of all the episodes that we were going to be receiving in the first half of Season 8, this was the one that I know many Bronies and Pegasisters in the fandom were the most excited for...I mean, Queen Chrysalis is always a delight whenever she's on screen with how deceitful and manipulative she can get and the idea of her trying to reclaim her power and kingdom after everything that she worked for was taken away sounded like this would make for quite an viewing experience...but would a fan favorite return be a memorable one or would it have me seeing green?

Overall if you all are willing to look at this episode for what it's trying to be rather than what is actually presented, you will find that 'The Mean 6' is a marvelous followup to what was a marvelous season finale and I'm gonna give it a 10 out of 10...but one can only wonder when Queen Chrysalis will return and what she has planned next 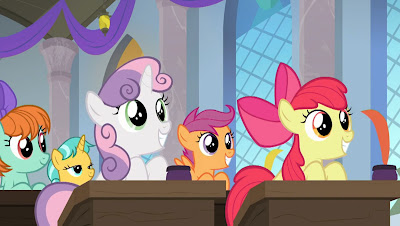 When we last left the Cutie Mark Crusaders, they had helped a young hippogriff named Terramar figure out whether he belonged on Mount Aris with his father or in Seaquestria with his mother...but let's see what happens when they try to enter the School Of Friendship in today's episode, this is 'Marks For Effort'!

The Cutie Mark Crusaders try to convince Twilight Sparkle to let them into the School of Friendship, even though it's clear they've already mastered the curriculum.

When I first heard the concept of this episode, I was immediately thinking that the show staff were retreading over old grounds with the CMC from all the way back in Season 1 when they first formed their secret society in order to get their cutie marks in the first place...but then I thought back to how great of an episode that 'Surf And/Or Turf' was and I said to myself that this episode could still be interesting.

Overall...while it does have a few flaws here and there, the effort that was put into 'Marks For Effort' really does show and I'm gonna give it an 8.5 out of 10 for that. 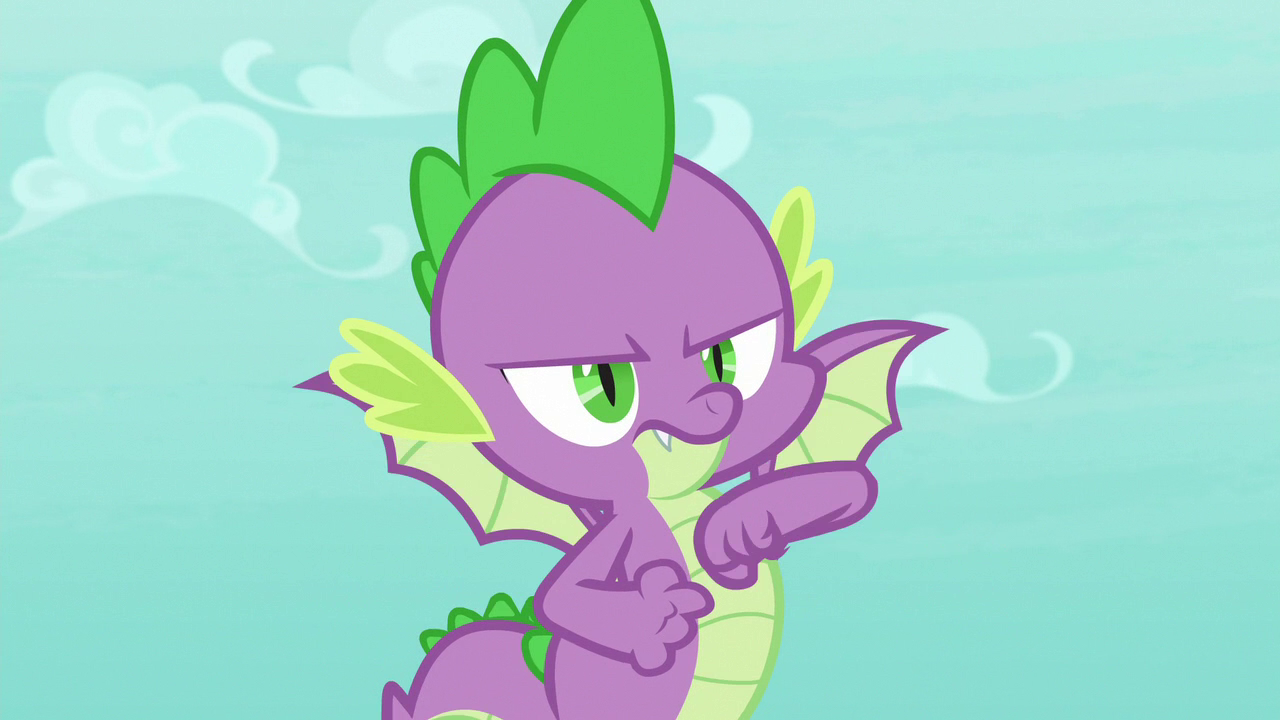 Ever since Twilight Sparkle helped him hatch out of his egg back in Season 1, Spike really has come a long way-he's gone from being an unbelievably stupid and ignorant child that generally annoyed the fans during the early days of the series to a fully developed character who in a way has become the voice of reason for many characters such as Starlight Glimmer in the later seasons and has even officially been given the title of Friendship Embassador to the dragons.  But every now and then, every child grows up into an adult and it looks like Spike may finally be going through some changes of his own in our next episode of Season 8...this is 'Molt Down'!

Spike struggles with a series of bizarre symptoms that Smolder explains is something all dragons go through in adolescence: 'the molt.' Smolder also reveals an unfortunate 'molt side-effect' that compels a molter's family to kick them out of the house!

Let's be honest, everypony...the Spike episodes were always hit-and-miss in the past and it wasn't until Season 6 that we started getting really great episodes as well as some awesome character development out of Spike as well...but when we received word that Spike would soon be going through his adolescent stage, this was a concept that actually had me excited in seeing where this episode was going to go.  Does Spike have enough fire power to make another awesome episode in Season 8's lineup?

Overall if the humor is the only thing that needed to be changed, then I have nothing to complain about with 'Molt Down' as it gives us plenty of world building to expand upon and one of the biggest surprises of the season so far and I give it a rating of a 9.5 out of 10...and thus we enter the mid-season hiatus, all we can do now is play the waiting game. 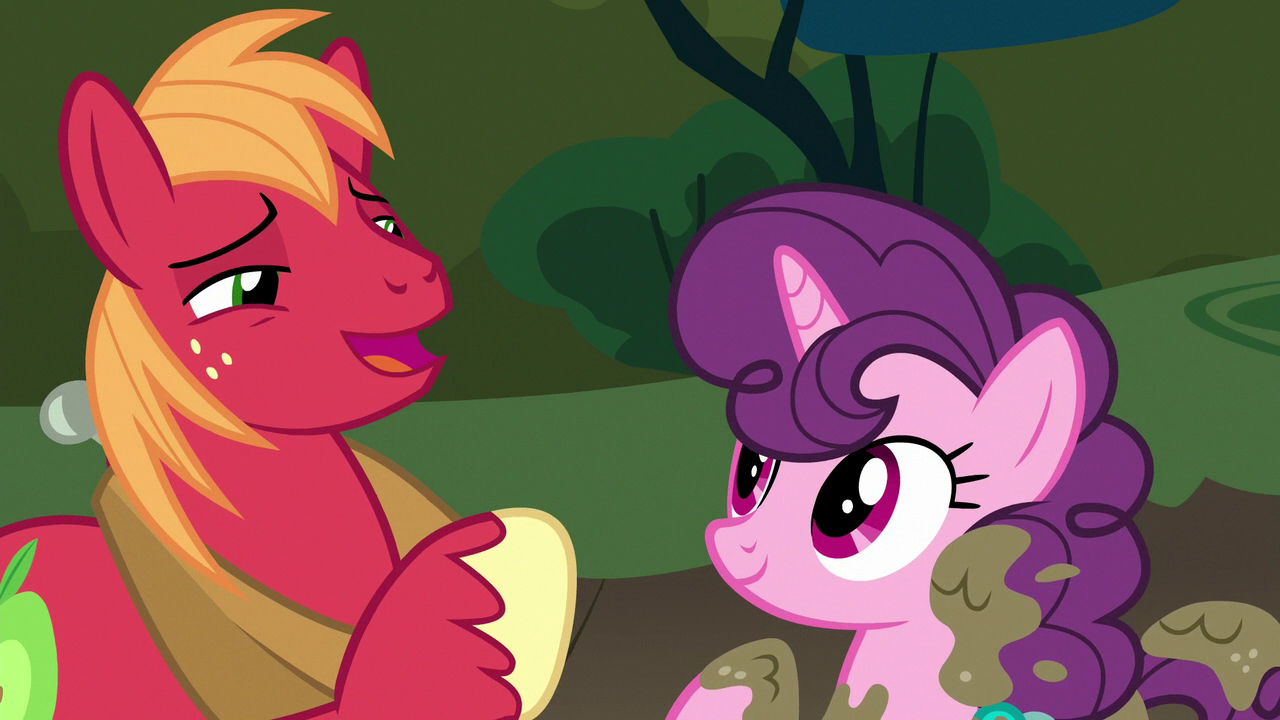 Season 8, Episode 10: The Break Up Breakdown
Written By Nick Confalone

Back in 'Hard To Say Anything', it was revealed that Big Mcintosh had his very first crush in the form of Sugar Belle resulting in him battling a pony named Feather Bangs for her heart with Big Mcintosh coming out on top by building her a new display case for her shop...but it sounds like this relationship may be over before it even started, let's find out if that's the truth in our next episode of Season 8-this is 'The Break Up Breakdown'!

It's Hearts and Hooves Day and Big Mac has romantic plans for Sugar Belle, but the day takes a turn when he overhears his special pony tell Mrs. Cake she's planning on breaking up with him!

I'm gonna be honest...after the last two episodes gave a less than stellar performance, this was one that I was really excited for and really hoped didn't suck because...even though I wasn't a fan of the episode 'Hard To Say Anything', one of the things that I enjoyed the most about it was the newly developed relationship between Big Mcintosh and Sugar Belle-it was one of the few romantic couples that I thought was appropriate and one that I definitely wanted to see developed further, but will a broken up relationship result in another broken down episode?

Overall while predictable, 'The Break Up Breakdown' was just the pick-me-up that Season 8 needed to help get back on track and I give it a rating of an 8 out of 10. 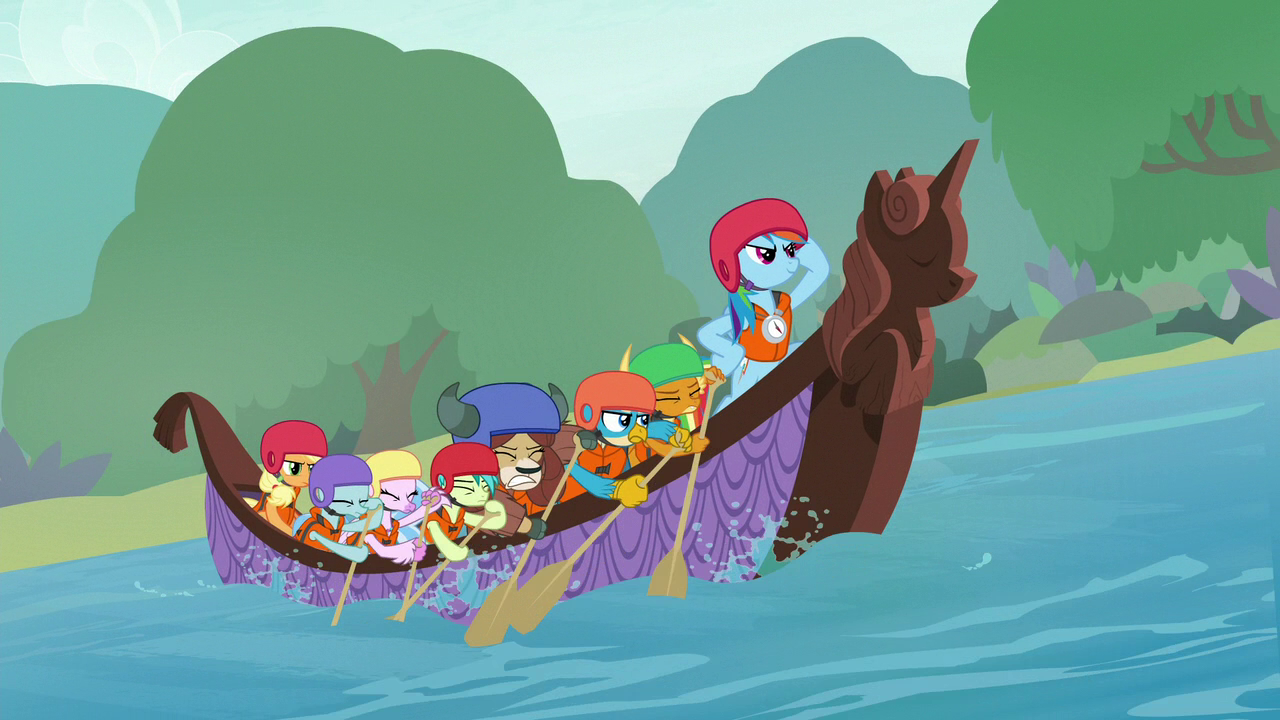 Applejack and Rainbow Dash...when it comes to episodes where you two share the leading role, you have easily had the most out of any other pairing in the Mane 6 and it seems that they always involve you two getting into a competition between each other even as far back as Season 1 in 'Fall Weather Friends'.  Will your competition get in the way of a field trip with the School Of Friendship students?  Let's find out with our next episode of Season 8, this is 'Non-Compete Clause'!

Applejack and Rainbow Dash take the friendship students on a teamwork learning field trip, and accidentally show the students how not to work together.

After seven episodes of adventures outside of the School Of Friendship from romantic endeavors to acting lessons, it's finally time to head back to class and rejoin the students in their quest to learn more about the magic of friendship...but were Applejack and Rainbow Dash really the best ponies for the job of taking them on a field trip?

Overall aside from the animation, I didn't crack a smile once while watching 'Non-Compete Clause'-no wonder everypony says that it was the worst of the leaked episodes since it committed the biggest crime any episode could: it made me question whether or not 'My Little Pony' is that great a show to begin with...and for that, I give it a 3 out of 10. 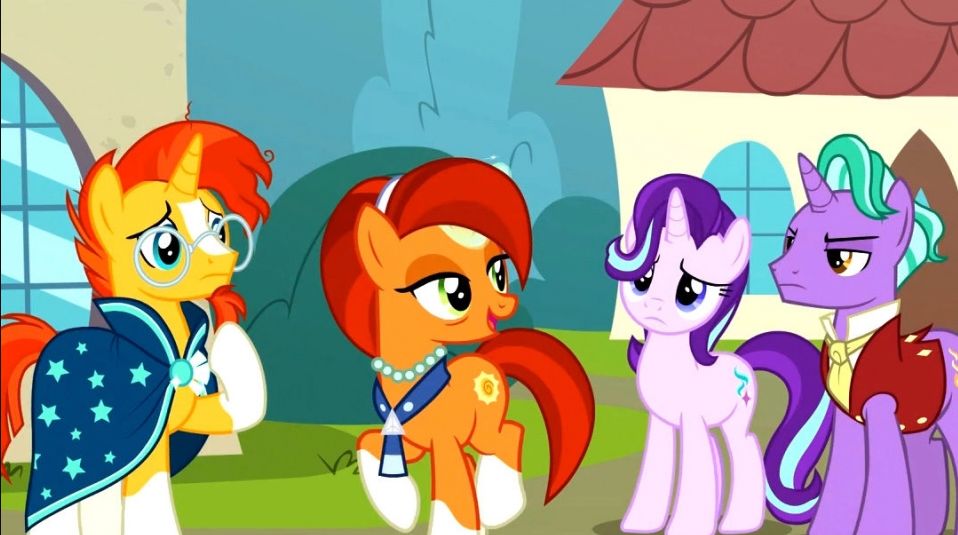 Sunburst and Starlight Glimmer-ever since you two went your separate ways in foalhood, you have been through quite a lot together from Sunburst excelling in magic at Celestia's School For Gifted Unicorns to Starlight going from communist villain to heroic pupil to Twilight Sparkle herself.  But one question still remains...how are their parents been handling their children even after all of this had happened?  It's time to finally find out the truth in our next episode for Season 8, this is 'The Parent Map'!

Neither Starlight nor Sunburst have visited their parents in a long time, but when both are called by the map to their hometown, they discover their parents are at the center of the friendship problem they need to solve.

FINALLY...we're finally getting our first look at the parents of Sunburst and Starlight Glimmer or as the shipping community calls them 'Starburst'.  I'm serious, the excitement levels I had for this episode were on the same level as when we got word of episodes about Rainbow Dash and Applejack's parents back in Season 7...but at the same time, I was really hoping that this wouldn't be another episode where Starlight Glimmer uses magic to solve her problems again considering the track record that she has had ever since she was reformed in Season 5

Overall, 'The Parent Map' felt more like a parent trap (see what I did there?) to kill what could've been an awesome episode and I unfortunately have to give an episode as average as this a 5 out of 10. 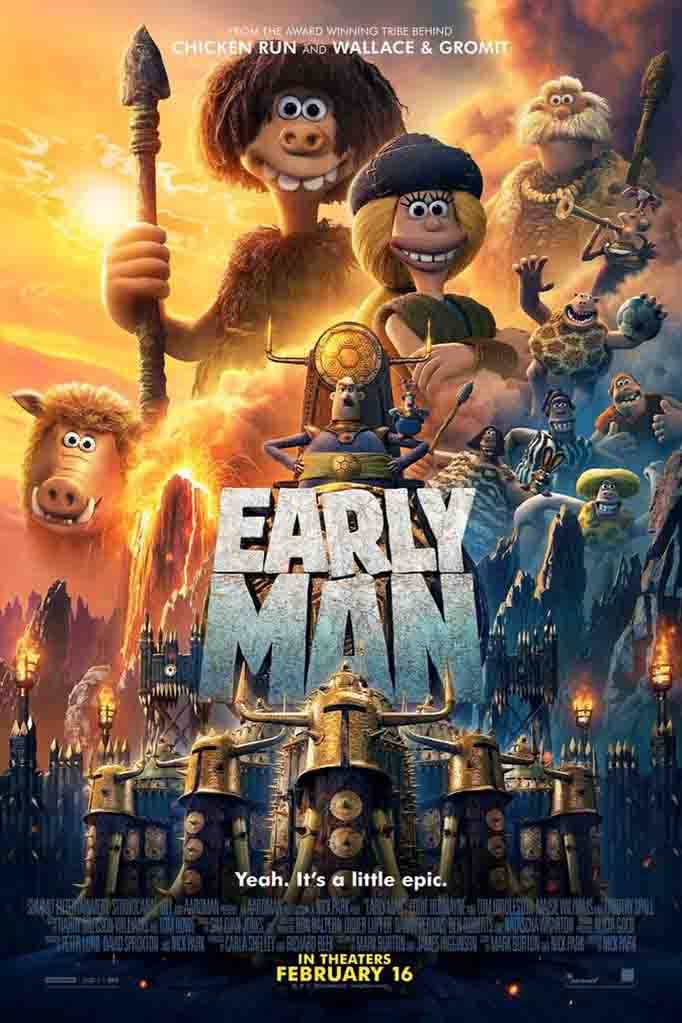 Man, it has been quite a while since we last saw the team at Aardman Animations on the big screen; their last film being 'Shaun The Sheep Movie' from back in 2015...and it seems as though they've come back in a big way with both an original feature as well as the return of director Nick Park-the creator of 'Wallace & Gromit' as well as being one of the three people who helped shape Aardman to become one of the most beloved non American animation studios with famous projects like W&G, 'Creature Comforts' and their first theatrical release 'Chicken Run'...which turns out is actually going to be getting a sequel soon.  But going back to 'Early Man', will Nick Park and the team at Aardman be able to create a shining movie like the Bronze Age or has the studio finally gone extinct?  Let's find out, this is 'Early Man'!

A plucky cave man named Dug (played by Eddie Redmayne), his sidekick Hognob (played by Nick Park) and the rest of their tribe face a grave threat to their simple existence when Lord Nooth (played by Tom Hiddleston) plans to take over their land and transform it into a giant mine, forcing Dug and his clan to dig for precious metals. Not ready to go down without a fight, Dug and Hognob must unite their people in an epic quest to defeat a mighty enemy -- the Bronze Age.

Overall, 'Early Man' may not be Aardman's finest work they've ever made and I can now see why my early screening event for the movie with the Baltimare Bronies didn't go over well...but it is still an enjoyable movie full of heart and humor and I'm gonna give it an 8 out of 10.

Now if you'll excuse me, I need to go suit up for a movie fourteen years in the making that's sure to be 'incredible'...
Posted by True Blue at 5:40 PM No comments: