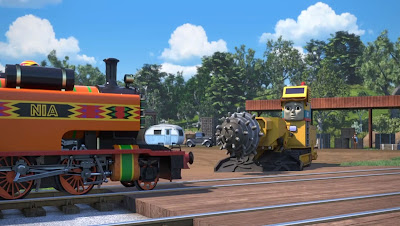 
When we last left Jack And The Pack, Brenda The Bulldozer was so obsessed with keeping the construction site of the new Wellsworth Hospital nice and flat that she ended up causing confusion and delay by accidentally moving the stone needed for the foundations away from where it was needed since she believed that her jobs were more important than any of the other vehicles...in a way, you could say that Brenda got too big for her blade.  But no sooner do we get a proper introduction of one new recruit to The Pack, we are about to meet another new friend who goes from 'boring' to awesome with a spin of her drill...so let's welcome Darcy to the North Western Railway as she begins her 'First Day On Sodor'!  Let's take a look...

FIRST DAY ON SODOR: Darcy makes some mistakes on her first day, but she soon makes up for it when everyone sees what she can really do.

Overall while the moral of 'just being yourself' is one that we know all too well in the Thomas & Friends universe from both males and females on the North Western Railway, 'First Day On Sodor' as the introduction to the newest member of The Pack certainly 'aimed to please' as Darcy likes to say and it certainly did in my opinion in order to receive a rating of a 9 out of 10...welcome to The Pack, Darcy!