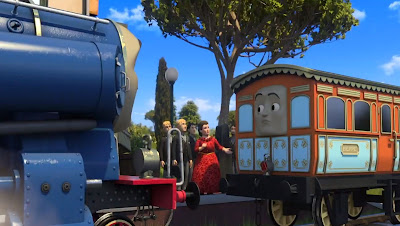 When Thomas went on a big world adventure to help on the railways of Italy, he had heard from the amphibious giant Stefano about the legendary yet curious lost engine Lorenzo who along with his coach Beppe in tow traveled from Rome to Napoli searching for rare hidden treasures until he got stuck in a closed mine unable to move...and it was a real surprise for Thomas along with Gina and Stefano as well as Thomas' construction friends from The Pack when Thomas discovered that the legend of the lost engine was in fact real when he found the pair of best friends while wishing to make an exciting discovery.  But now that Lorenzo and Beppe are repaired and good as new, what curious adventures will these two get up to now?  Let's go go go on a big world adventure and find out as we sing along to 'Lorenzo's Solo'!

LORENZO'S SOLO: Lorenzo decides to take a bigger coach so he can pull famous opera singer Dame Bella Canto, but he is soon lost without his good friend Beppe

Overall as the episode to welcome us back into the beauty of Italy, 'Lorenzo's Solo' unfortunately started us off on a sour note because a character who I was really looking forward to seeing again ended up doing a complete one-eighty and unfortunately continued the trend of arrogant tender engines who think they know better than everyone else...I am so sorry to do this to both Lorenzo and Beppe for their very first solo episode of the series, but I unfortunately have to give 'Lorenzo's Solo' a 6.5 out of 10.