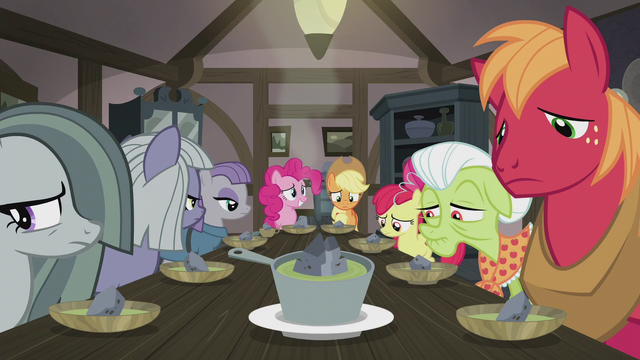 Just finished watching this week's new episode "Hearthbreakers" and...while it is odd that we're getting a Christmas episode a week before Halloween, this episode was still really good. The story was a combination of Season 2's "Hearth's Warming Eve" and Season 4's "Pinkie Apple Pie", but it did a great job in showing how not all families celebrate Christmas the same way and they all have their different traditions. Not only that, but it left you with that warm and fuzzy feeling you should get from a Christmas special or movie.

On top of that, the animation and characters both shine in their own ways as there was a strong dynamic between the Apples and Pies since it showed that the rest of the Pie family have their own personalities and aren't just carbon copies of Pinkie Pie and Maud Pie.


Overall, while it just missed making it onto my Top 12 Christmas Specials list, "Hearthbreakers" is a really great episode that I'll be sure to come back to watch every Christmas and gets an overall rating of a 9 out of 10. And since I've already reviewed next week's episode (Scare Master) back when it was leaked early, I'll see you all in two weeks for "What About Discord?".


Until then...stay spooky and have a happy Nightmare Night, everypony!﻿
Posted by True Blue at 5:06 AM No comments:

MLEEP Reviews: The One Where Pinkie Pie Knows