Fred Rogers, the host of the critically acclaimed children's series 'Mister Rogers' Neighborhood' who revolutionized the idea of children's television with how it should be versus what shouldn't it be and what it should communicate to children in order to make them feel accepted in the world that they live in...and it would only make sense that a documentary should be made this year to celebrate the fiftieth anniversary of the day that 'Mister Rogers' Neighborhood' first debuted on television, but did it do a good job in recapturing of who this brilliant man was and the unforgettable series that he created?  The answer is...yes, it truly did.

The question with 'Won't You Be My Neighbor' is not 'did you cry', but rather 'how many times and when'...I mean, the first five minutes already had me emotional when they snapped a wooden crate open and pulled out the trolley for the Neighborhood Of Make-Believe.  For those who don't know, 'Mister Rogers' Neighborhood' was one of my all-time favorite shows growing up as a kid along with 'Shining Time Station' and 'Theodore Tugboat' and when you consider that the only other successful children's show at the time of the series debut was 'Sesame Street'...it really shows how far children's television has come ever since the early days.

This documentary also does a really great job in not only illuminating the contradiction of Fred Rogers as a person, but also the paradox of his series and how nothing about it should make sense as far as being a hit in order to strike a chord with so many kids.  There were a number of moments where you see Fred making people who were on the fringes feel accepted and valued whether they were in a wheelchair or homosexual...Mister Rogers loved him for who they were and that's why he was a father figure to so many people.  But where the documentary truly shines in my opinion is when it takes a look outside of the studio and shows Fred Rogers' perspective of the world and what frustrates him about war and children's television...they even manage to show the footage of him going before Congress to get additional funding for PBS.

I guess if I had to name one thing I didn't like about 'Won't You Be My Neighbor', it would probably be that I really wanted to see more...I wanted to see them show the behind-the-scenes making of how they made 'Mister Rogers' Neighborhood' whether it was the writing process or any of the other elements that went into making this landmark series, but then I remembered that PBS already did an hour-long special that actually did just that called 'Mister Rogers: It's You I Like'...so it doesn't really bother me that they didn't do that for this documentary.

What else can I say that hasn't already been said?  'Won't You Be My Neighbor' is a beautifully-made love letter and a reminder of the power of Fred Rogers' kindness and generosity in the media...and to come out on the year of the fiftieth anniversary of his series, this film couldn't have come out at a better time and I'm proud to give 'Won't You Be My Neighbor' a rating of a 10 out of 10.

It's such a good feelingTo know you're alive.It's such a happy feeling;You're growing inside.And when you wake up ready to say:I think I'll make a snappy new day.It's such a good feeling,A very good feeling.The feeling you know, that I'll be backWhen the day is new.And I'll have more ideas for you.And you'll have things you'll want to talk about.I will too.
Posted by True Blue at 5:07 PM No comments: 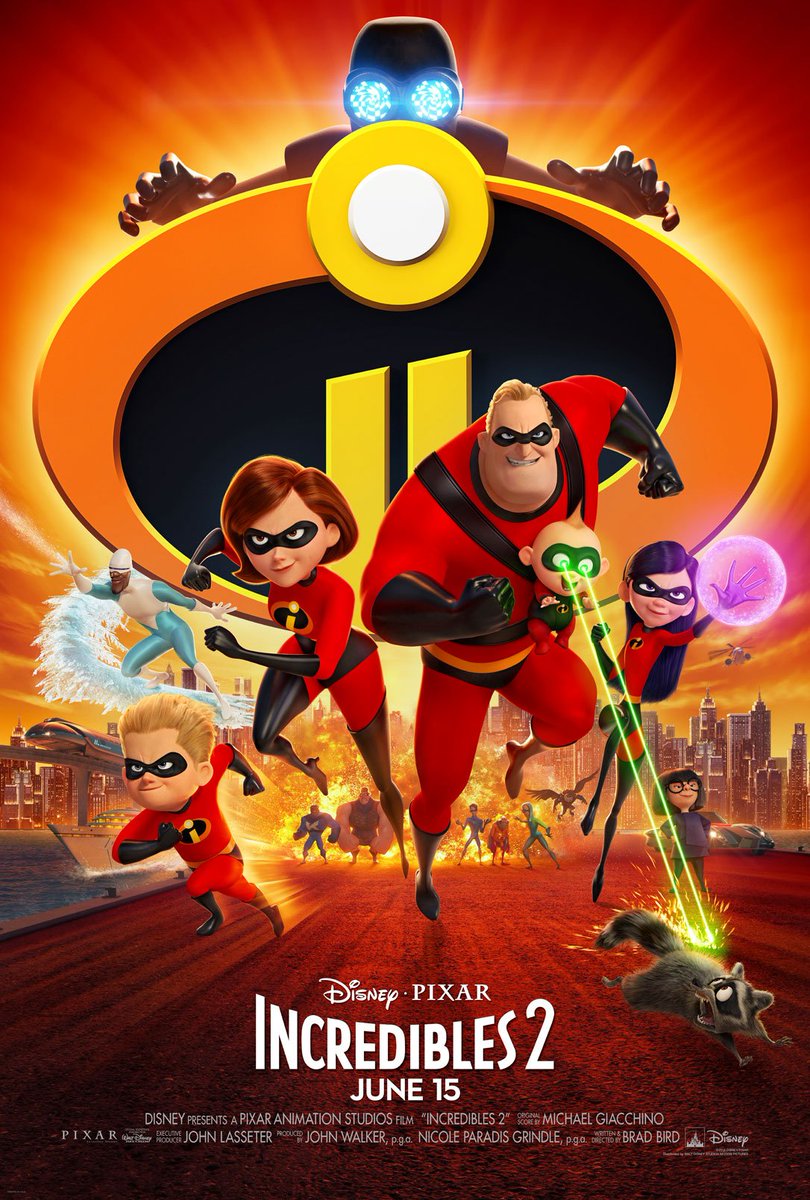 The time has finally come at last...I don't think there has ever been a more demanded sequel from Pixar than for 'The Incredibles' which is hailed as not only one of Pixar's best animated films, but also among one of the greatest animated films of all time and we had to wait a total of fourteen years to see the anticipated battle of The Incredibles VS. The Underminer-no, the Nintendo video game does not count!  With how highly demanded this film was for many years, it seems that Pixar would always turn the other way and make a followup of their other properties whether people wanted them or not such as 'Toy Story' or 'Cars'-heck, even 'Monsters Inc.' and 'Finding Nemo'!  Will the film still be as incredibly strong as its predecessor or were there some supersuit malfunctions?  Let's find out because the time has come to experience the most anticipated sequel of all time...this is 'Incredibles 2'!

Telecommunications guru Winston Deavor enlists Elastigirl to fight crime and make the public fall in love with superheroes once again. That leaves Mr. Incredible with one of his greatest challenges ever -- staying home and taking care of three rambunctious children. As Violet, Dash and Jack-Jack offer him a new set of headaches, a cybercriminal named Screenslaver launches his dastardly plan -- hypnotizing the world through computer screens.

To quote the tricycle kid from the first movie, 'THAT WAS TOTALLY WICKED'!  I'm serious when I say 'Incredibles 2' is a great successor to one of Pixar's best films ever that still holds the same amount of action and heart...even if the story is structured too similarly to its predecessor.  If you're a fan of Pixar or even 'The Incredibles' in general, this is hands down a must-watch and I'm proud to give 'Incredibles 2' a 9 out of 10.  After fourteen years, the wait was worth it...
Posted by True Blue at 1:42 PM No comments: