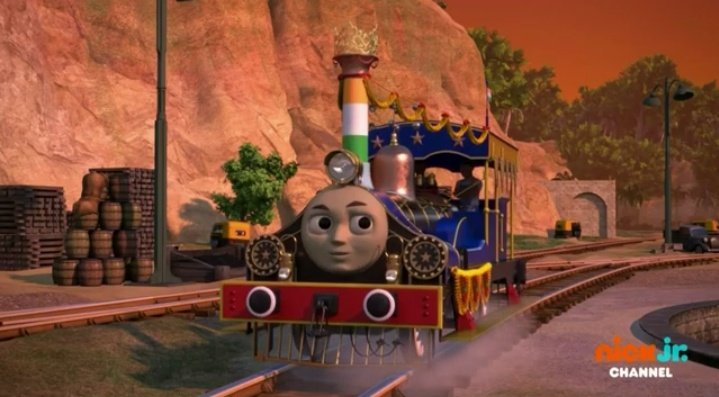 Ever since he won the Best Decorated Engine competition at the Great Railway Show, Rajiv has proven to be rather arrogant and vain believing himself to be a "royal engine" due to his crown resulting in making patronizing or belittling remarks to the other engines. But Rajiv's heart is in the right place along with his good sense of humor and he does care for his friends deep down though he'll often be sensitive if it comes close to his crown getting lost or damaged...and it looks like that day has finally come as we go go go on a big world adventure back to India with Rajiv as we go 'Crowning Around'!

CROWNING AROUND: Rajiv learns that he can be really useful with or without his crown in India

Overall, 'Crowning Around' is an episode that is gonna largely depend on how you feel about Rajiv as a character with how much he brags about his precious crown...and while it's true that his constant bragging can be annoying at times and Rajiv getting his crown back in the end felt forced, 'Crowning Around' as Rajiv's first starring role episode still made for a really great trip back to our railway friends in India and for that earns a rating of a 9 out of 10.