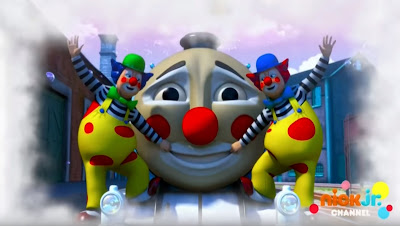 Gordon's important position as the engine who pulls the express has made him extremely proud, pompous and self-important with a good reason too since he is the fastest engine on Sodor which can make him inclined to boast and act like a bully to the smaller engines on top of a great hate for pulling goods trains...but it looks like Gordon may have laughed his express-pulling duties away forever and it's driving him insane. Let's go go go on a big adventure for what is sure to be a very silly ride on the express when 'Gordon Gets The Giggles'!

GORDON GETS THE GIGGLES: On Sodor, Gordon becomes very worried when he gets a serious case of the giggles after Rebecca gets herself into a sticky situation

Overall for what sounded like a very odd concept from the start, 'Gordon Gets The Giggles' still managed to be a pretty great episode for our first adventure back on the Island Of Sodor and for that earns a rating of an 8.5 out of 10.