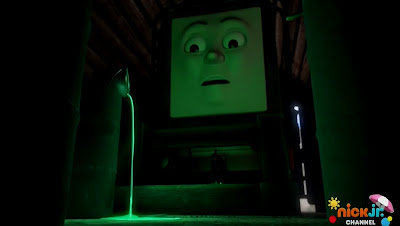 Some engines on the Island Of Sodor give diesels a bad reputation and no engine better exemplifies this than the sinister shunter himself Diesel.  Being the first diesel engine to arrive on the North Western Railway, Diesel views himself and any other diesel as highly above the steam engines and believes that all diesels are "revolutionary" while also claiming diesels should be "rough and tough" as an excuse for bullying the other engines particularly towards Thomas and Duck...but it looks like he may have found a way to light up the night!  Let's go go go on a big adventure as 'Diesel Glows Away'!

DIESEL GLOWS AWAY: When Diesel hides from the other engines on Sodor, his plans backfire and he gets a surprise

Overall...while the story to 'Diesel Glows Away' is a jumbled mess, it still managed to be a pretty alright episode throughout the delightful duo of Paxton and Nia who like I said earlier work really well together.  So for that, 'Diesel Glows Away' gets a rating of a 7.5 out of 10.