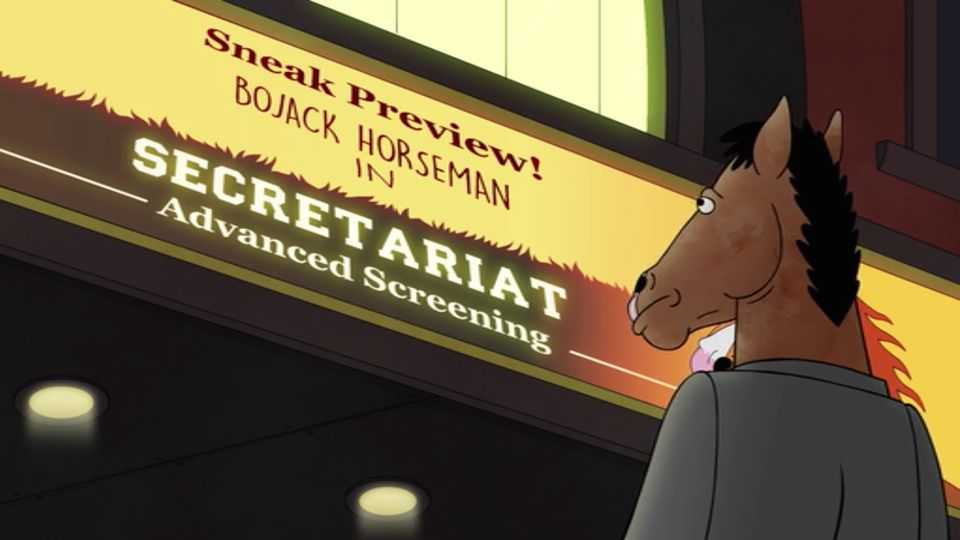 After the success of his best-selling memoir and even managing to land the movie role of his dreams back in Season 1, BoJack Horseman was ready to jump start his career and his life as we saw throughout the duration Season 2 from wanting director Kelsey Jannings to like him while on the set of 'Secretariat' to teaming up with his friends to steal a crucial shot for the film...but it wasn't without its shortcomings as BoJack still found a way to mess things up despite his best efforts to change from getting involved in one of Hollywoo's biggest scandals to getting his former director fired for going against producer Lenny Turteltaub's orders replacing her with Abe D'Catfish on top of losing one of his closest friends he had during the days of Horsin' Around.  But with 'Secretariat' now being a huge success and BoJack finally feeling his oats, will everything he touches turn to manure again?  Let's find out 'cause it's time to 'Start Spreading The News' with Season 3 of BoJack Horseman...let's take a look!

START SPREADING THE NEWS: Ana Spanakopita sends BoJack to New York to do interviews and Todd tags along while Princess Carolyn tells Mr. Peanutbutter to get back to work.

Overall, it's time to 'Start Spreading The News' since Season 3 of BoJack Horseman is already off to a great start...and with how ruthless things are so far for BoJack with his new publicist and his reputation almost put in jeopardy by reporters, I can tell that this season of BoJack is gonna be darker than ever before in terms of its subject matter about feeling micromanaged by others.  But for now, 'Start Spreading The News' 'cause this premiere episode gets a rating of a 9 out of 10.

When we last left BoJack Horseman, he had once again found himself in quite a predicament from his ruthless publicist Ana Spanakopita constantly ridiculing him and his past as a sitcom actor in order to make sure he wins an Oscar for his movie 'Secretariat' to nearly getting exposed in one of the biggest scandals Hollywoo had ever seen through a hidden recording by his old friend Heather...but now that we have kicked off Season 3 with a bang in what is sure to be quite a dark and mature season of BoJack Horseman, it's time to continue onward by checking out what's new on television with 'The BoJack Horseman Show'!

THE BOJACK HORSEMAN SHOW: In 2007, Princess Carolyn finds a new project for BoJack while Diane meets Mr. Peanutbutter at the coffee shop where she works and Todd kisses a girl.

Overall for an episode that is told through flashback to present BoJack's second television series that never really went anywhere, 'The BoJack Horseman Show' is another winning entry to add to the list of Season 3's streak so far...whether or not we can keep the streak of great episodes coming so far is up for debate at the moment, but 'The BoJack Horseman Show' manages to get a rating of a 9 out of 10.