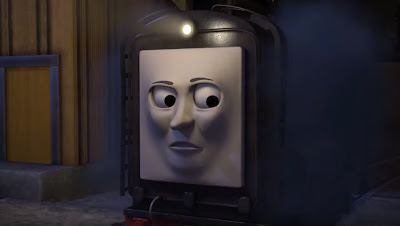 When we last left Diesel, he had hid from the other engines at the Dieselworks after they had wondered if it would be easier to useful if Diesel wasn't around constantly bumping them all the time which led to him covering himself with glow-in-the-dark paint pretending to be a ghost as a way to make the other engines come and look for him resulting in the duo of Paxton and Nia tricking the trickster into doing his own jobs and...it was an alright episode-not perfect since the writing was a jumbled mess, but it did have its fun moments.  What trickery does Diesel have up his sleeve this time...let's go go go on a big adventure and find out with 'Diesel Do Right'!

DIESEL DO RIGHT: When Diesel is cross, he decides to get the other diesels into trouble by sending Rebecca to do their jobs badly

Overall, 'Diesel Do Right' is much better than 'Diesel Glows Away' and it's not just because Rebecca is in the episode...while it is true that it doesn't have the most original story and that mostly comes from Diesel's trickery backfiring on him becoming more and more predictable especially when you realize that Diesel should've been sent away for good with the trouble that he caused during the model era of the series, it does make up for it with its humorous moments and a great cast of characters which are sure to inspire plenty of new material for the fandom to work with and that is why I'm gonna give 'Diesel Do Right' a rating of a 10 out of 10.