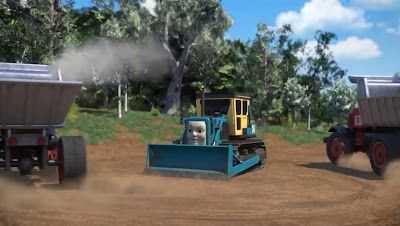 Season 23, Episode 19: Out Of Site
Written By Michael White
Directed By Dianna Basso

When Thomas went on a big world adventure in Italy with his old friend Gina from the Great Railway Show, he met so many new friends on his travels from the amphibious giant Stefano to the excitable excavator Ester who was in need of help in digging the foundations for a new museum for ancient artifacts when the original site was on top of an ancient Roman palace...and while Thomas was not an expert on all things Italian, he was an expert in friendship and he called upon his construction friends from The Pack to help out with the archaeological dig while Thomas was busy solving the mystery of The Lost Engine much to the Pack's amazement when the old story was real after all.  But now that Thomas and the Pack's adventures in Italy are over for now, it's time to journey back to Sodor for a double dosage of construction with the most cracking crew the North Western Railway has ever seen by welcoming two new recruits as we go 'Out Of Site'...let's take a look!

OUT OF SITE: Brenda learns that it's important to work as a team and not just care about her own jobs.

Overall even with Brenda's constant desire to keep the construction clean and tidy, 'Out Of Site' still managed to be a pretty good and proper introduction for the newest member of The Pack into the Thomas & Friends universe along with bringing back a much loved familiar face after so long...for that, it deserves a rating of an 8 out of 10 and the fun is only just beginning in our construction double feature as we are about to welcome another new face to the team who goes from 'boring' to awesome.  See you next time!