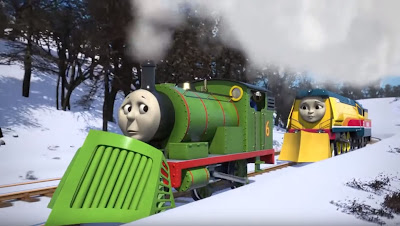 Despite being a funny and kind engine, Percy is known for worrying about things which can make him a little bit panicky...but through the wise words of his faraway friend Gator, Percy can also be a very brave engine as he goes about his jobs helping his friends on the North Western Railway.  Even so after his friend Gator left Sodor to work in the high mountains , Percy is still one to get scared quite easily and it looks like he has let his imagination run right off the rails when his best friend Thomas might have had an accident...let's go go go on a big adventure with 'Panicky Percy'!

PANICKY PERCY: When Percy imagines Thomas having an accident, he causes confusion and delay by getting everyone into searching for Thomas when he is absolutely fine

Overall much like the story itself, 'Panicky Percy' is an episode that caused more confusion and delay than it really needed to and that mostly has to do with the main character...I love Percy-he's one of my favorites, but it's been five years since he learned about what it really means to be brave from his best friend Gator and yet it's like he's completely forgotten everything just so the show staff could take his panic attacks to the highest degree imaginable. While not a bad episode since it does have its good moments, 'Panicky Percy' still gets a rating of a 6.5 out of 10.