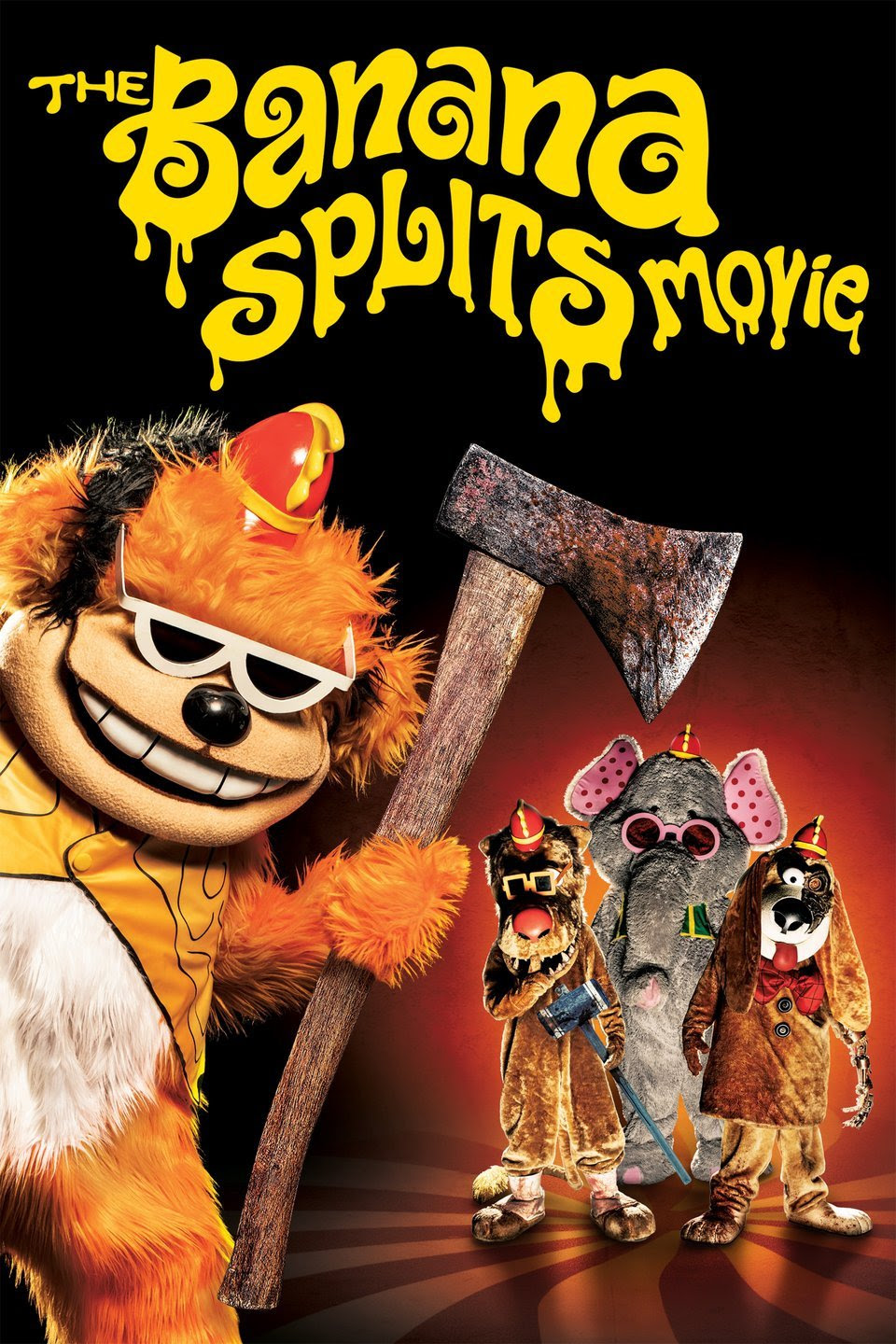 You guys have no idea how excited I am to satisfy my curiosity with this one...believe it or not when I was a kid, I actually saw The Banana Splits.  There was a little period during my childhood mostly when my family was at restaurants like Glory Days or Cici's Pizza when I would watch a whole bunch of Hanna-Barbera shows on Boomerang checking them out one by one rather it be 'The Flintstones' or 'The Jetsons' or 'Yogi Bear'.  I used to be into a lot of different Hanna-Barbera shows of course and a lot of them are really popular, but then you would also have some of the smaller shows that didn't necessarily last long and one of those was of course 'The Banana Splits': now I didn't necessarily care for the cartoons that would air during The Banana Splits because a lot of them were really the Johnny Quest-style action cartoons that Hanna-Barbera would often make, but I would watch The Banana Splits mainly for the live-action segments because they were a lot more psychedelic to look at and a lot more funny than the cartoons they were presenting since you just wanna hang out with the goofy characters that they have from Bingo to Drooper to Fleegle to Snorky.

That was the main selling point of The Banana Splits-you want to hang out with this cartoon band and it was just a lot of fun seeing their crazy shenanigans of which I actually got to see The Banana Splits performing at Hard Rock Park during the one year that it was open down in South Carolina back in 2008 and...while it's not necessarily my favorite of the Hanna-Barbera shows nor is it the most memorable, I do remember it as a period from my childhood and had a good time with them.  Fast forward many years later, The Banana Splits got back into the news...and not only would they return for a movie, but somehow they decided to turn The Banana Splits into an R-rated horror slasher film.  It was possibly one of the weirdest pieces of news that I have heard in recent years, but I knew that I wanted to go and check it out while hoping that this film would answer three big questions: why do they want to turn The Banana Splits into a horror movie, why do they want to make a Banana Splits movie after fifty years since it existed and why are Warner Brothers and the people handling the Hanna-Barbera properties okay with this.  Looks like it's time to find out and watch the madness unfold with 'The Banana Splits Movie'...let's take a look!

THE BANANA SPLITS MOVIE: A boy named Harley and his family attend a taping of The Banana Splits TV show which is supposed to be a fun-filled birthday for young Harley and business as usual for Rebecca-the producer of the series. But things take an unexpected turn and the body count quickly rises...can Harley, his mom and their new pals safely escape?

We live in an era where fans demand their nostalgia be vacuum sealed and placed on a golden pedestal, and here comes a movie based on a beloved kids series in which the cuddly animal rock ’n’ roll band comes to life and murders everybody in the audience: it’s bold, it’s subversive and it must be noted that it’s damn near apocalyptic as far as branding goes since Hanna-Barbera’s 'The Banana Splits' are a gory, R-rated horror franchise now and you’d have a lot of trouble putting them in an innocuous kids show now that the target wholesome demographic can also see Fleegle saw someone in half and celebrate as their guts fall out. That anarchic attitude towards a pop culture institution helps rescue 'The Banana Splits Movie' because it wouldn’t be a particularly noteworthy horror movie without its premise since the kills are satisfyingly gross and the cast is uniformly adequate and yet watching someone get bludgeoned to death with a cartoonishly over-sized hammer isn’t nearly as intriguing as watching a popular childhood icon do it which is what helps this movie succeed in the gore department with a satisfying sequence of slasher slays and lots of gross kills but yet the film relies so much on cognitive disconnect that it never feels like more than an ironic kill count. The decision to film the majority of them with muted tones while telegraphing all the horror to come, probably does the film’s raison d’être a disservice since it always looks like we’re watching an ultra-violent movie with the Banana Splits in it and never like we’re watching a Banana Splits episode with ultra-violence in it. Instead of feeling unwholesome while baked into the premise, The Banana Splits Movie feels a bit like a foregone conclusion.

The script by Scott Thomas and Jed Elinoff who also wrote 'The Jetsons & WWE: Robo-WrestleMania' wastes no time introducing a bunch of other fodder-sorry, “characters”-who will mostly meet gruesome ends from overbearing stage parents to selfish TV executives and even adult Banana Splits fans who stream everything on Instagram because they’re all on site to watch what we soon discover will be the last episode of The Banana Splits since the studio is under new management and the Splits even though they’re a cultural institution aren’t cool anymore...and if you think that’s bad, wait until you find out that the Banana Splits aren’t actually people in suits but life-sized super strong animatronic robots whose faulty programming demands that the show must go on always even if they have to kill everyone in the studio. Except for the protagonists, the characters almost all exist only to be horrifically murdered by childhood icons thus seeming like a calculated effort has been made to make most of the victims either terrible people or at least annoying enough to make us happy they’re finally off-camera. That’s par for the course in a slasher movie, but it’s just another example of The Banana Splits Movie relying on its premise to overcome the limitations of the story and yet that strategy mostly pays off.

Overall...oh boy, what an adventure! I know that I left a lot of nitpicks and criticisms, but let's be honest: all of that does not matter, it doesn't matter of the dumb things or the criticisms or the problems with 'The Banana Splits Movie' since it knows very well what it is. It's absolutely stupid, it's just supposed to be your typical slaughter film but with The Banana Splits and I will say...yeah, it's a bad and stupid movie but yet it knows what it is and it knows its kind of audience since you're just here to see The Banana Splits kill people in a very gory fashion and it did deliver what it's supposed to do on that front. I can't hate or fault it...and after watching this movie on SYFY for this year's Halloween season, I feel like 'you know what, it accomplishes its mission and it wanted to do what it wants to do...this movie succeeds in its mission' and I think it's worth it on that front. While it is uncertain if a sequel to 'The Banana Splits Movie' is in the future based off the cliffhanger we receive at the end, for now I'm gonna give 'The Banana Splits Movie' a rating of a 7.5 out of 10.
Posted by True Blue at 1:43 PM