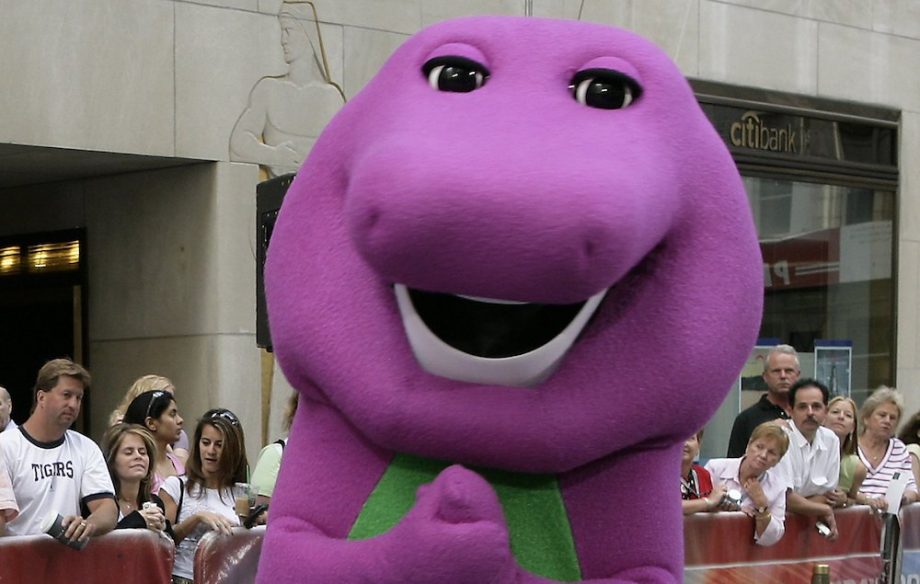 Well, with the recent announcement from Mattel about a movie in development...this editorial was inevitably gonna happen at some point

Barney is one of the most fascinating children's icons who ever existed: not because he had much lasting value for kids or adults, but because of the raw undiluted hatred everybody had for him. Unless you were somewhere between the ages of one and five, chances are you despised this early 90's educational phenomenon. Everywhere you looked, you either saw Barney or someone making fun of Barney.  There was no one who saw him as just okay: you either liked him as a little kid or loathed him at every other age...it was kind of amazing.  I'm not gonna lie, I hated this lumpy prune with mouth-guard teeth too but it wasn't until recently I started asking myself "why?"  I mean, it's for little kids and we don't find ourselves getting this upset at Sesame Street, Dora, Super Why or Word Girl.  But something about Barney just ignited a fire within most viewers who have little kids and were forced to watch it-heck, even people without little kids found themselves repulsed by his ability to delight toddlers! Yeah, it is weird that we got so angry at this but why exactly did he irk people so much?

Coming from someone who unfortunately grew up with this eye-a-saurus, it is hitting me with more clarity why it's so easy to dislike him.  One of the biggest reasons: he's creepy-looking!  When you compare him to Disney characters or the Muppets who spent years trying to perfect their designs, you can start to tell why.  First off, the eyes: they're the most expressive part of the face, so either making them very large and complex or smaller and simpler can make a big difference.  Barney's eyes are both big in the wrong way and small in the wrong way: the actual size of his eyes are tiny but not simple enough to leave a gentle impact yet his pupils are huge and literally glassy always looking dead stone or possessed by Yoshi Satan.  On top of that, his weird-ass teeth: again, Disney and the Muppets rarely incorporated that much dental, unless they want them to look intentionally weird.  You probably noticed a big smile with a lot of teeth often comes across as domineering or even a little scary and not making them sharp if anything kind of makes it even more creepy.  Remember when Sonic had normal-looking teeth...remember when sharks were Photoshopped with normal teeth? It didn't help anything, it just made shit scarier!  So before Barney even says a word whether in the series or the movies, you're already put off by him!

Finally, the third and final big factor in why people hate Barney so much: his personality!  I mean, you could have a kid insult Barney and all he did was laugh-something which could work for some characters, but you know Barney's just gonna be happy and that's it...and believe it or not even for little kids, that's not very relatable.  Think about other children's icons stayed with you because they showed they were more than one emotion: Mr. Rogers could talk about sad things like death and depression along with difficult emotions while Big Bird could feel awful when he finds out he's never gonna see someone ever again.  It's not just one emotion a great children's character can express: it's a gamut of emotions that all kids feel, to understand those feelings and to better respond to them is what I feel is the most important task in our world.  Barney would never feel sad or angry or confused: he was just happy all the time which after a while comes across as phony and even kind of shallow.  Don't get me wrong, I know it's weird to analyze something meant for like little little kids...but you're talking to someone who is still into Thomas The Tank Engine ever since he was two years old and part of this analysis is figuring out why everyone else hated one of his biggest competitors so much.  Part of that may be because we remember relating to other kids in media because it taught us how emotions and conflict work as well as numbers and letters and all they had to do was simply have more than one emotion. Imagine Barney having any other emotion other than happy: it would be crazy because neither his physical nor emotional design support it. He couldn't have the conversations they had on Sesame Street or Mr. Rogers because there was so little to him and it would just turn out insane if they did yet Daniel Tiger who was nothing more than a sock puppet does it and it feels more genuine because he isn't obnoxiously happy all the time. Kids can process their emotions as well as information without even knowing they're doing it and Barney flat-out rejects that.

All of that in my opinion is why he gets on so many people's nerves.