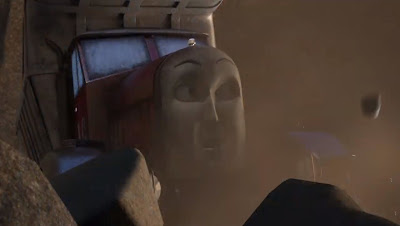 Despite being as hardworking as the rest of their colleagues in The Pack, Max and Monty are usually devious and manipulative trucks who cause trouble for everyone they come into contact with until they are sternly scolded by Miss Jenny or any other form of authority when they are found out...and it seems like they may have gotten themselves into deep trouble when working at the lead mines on Thomas' branch line. Let's go go go on a big adventure with Max and Monty as we get into some 'Deep Trouble'!

DEEP TROUBLE: Careless Monty ignores the warning flags and gets himself into very deep trouble

Overall for what was basically a Jack And The Pack-themed version of Season 1's "Down The Mine", 'Deep Trouble' hardly caused any trouble at all in bringing our adventures with Jack And The Pack for Season 23 as a whole to a close...from discovering in Italy to digging on Sodor, there is nothing that this team of construction vehicles can't do and that is why I'm giving 'Deep Trouble' a rating of a 9 out of 10.